As I approached the Unisphere and the Queens Museum Of Art, where the Tour De Queens begins and ends, I could see a large crowd of relaxed cyclists casually conversing while prepping for the ride. The temperatures were in the seventies, with some humidity, and a nice five to ten mile an hour breeze to keep things comfortable. Last year the humidity was so heavy it was almost wet, and the temperatures had soared into the nineties. So this year, especially for those returning cyclists who remembered last year, the day's weather was nearly perfect. The Bike Ride course was shortened from the planned 24 mile trail to about 18 miles, traversing the central / east neighborhoods of Queens. According to our sources the final course had not been finalized until Friday July 10, 2009. The trail was also slated to be outlined on the New York City panorama within the Queens Museum Of Art. This idea was dropped [it had been done last year], because the panorama was already being used by an artist in a current exhibit, ‘Red Lines Housing Crisis’, at the museum. Lynne Serpe, city council Green Party candidate, and her campaign manager Helen Ho, were both volunteers working at the event [see photo to left]. Safety precautions all seemed to be well in hand, as the registration desk moved the riders through pretty much flawlessly. Children under the age of fourteen were required to wear helmets, while adults were free to decide for themselves. In the photo album of riders [which you can click to below], a significant number of the cyclists coming out of the starting gate seemed to wear the cycling helmets. Sunscreen was well advised and we noticed several cyclists applying it while waiting for the ride to begin. There was a swat team of security riders at the start of the line [see photo to right], as well as a police escort. The event is sponsored by Transportation Alternatives, a non profit organization that promotes carbon free transportation alternatives. The intent of this event is to familiarize people with the fun, safety and environmentally friendliness of using a bicycle to get around. About one thousand riders participated in the event, which you can see in the photo to your left. As long lines lead from the registration desks at the Queens Museum Of Art, all the way to Queens Theatre In The Park. The bike course lead south into the Jamaica neighborhood after weaving along Queens Blvd. It then headed east and eventually headed north into Cunningham Park where it then turned west along Queens' Green Corridor which stretches through Kissena Park and back into Flushing Meadows Corona Park. It was expected that the police would move the ride through the borough at about a speed of five to ten miles per hour, meaning the whole event should have ended about 1.30 pm – just in time to catch the Mets game. You can see from the photos [in the album into which you can click below] that people of all ages and ethnicities participated. It’s worth noting that Captain Ted of the LIC Boathouse took shore leave to join in the ride before boarding his kayak at Socrates Sculpture Park in the afternoon [Ted is to the left in the photo to the right].

Click this link to view many more photos of the Tour De Queens bike riders coming out of the starting gate. And use the email box below to send a link of this story to your friends. 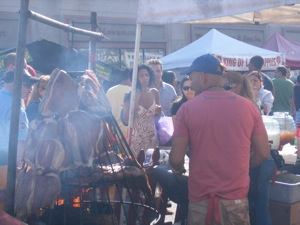