Click on the heading above to view events this month, including food fetes. I headed over to BQE Billiards and Bar for a photo shoot last week. They were working on developing a new website and I was helping them create the food photos. The side benefit of this excursion was that I was also able to partake in the feast that followed, where we all sat around and enjoyed sampling much of the food that was photographed. In the photo at right is the gyro plate sitting atop a counter space located within the pool area and overlooking the ping pong and arcade sections of BQE Billiards and Bar in Jackson Heights.

This story is going to include a review of some of the food I sampled, as well as delving into the history of one of Jackson Heights intrepid small businesses. BQE Billiards and Bar was founded 25 years ago by four partners, two of whom remain involved in the business today. So get comfy as we begin by traveling back in time, to the not-so-ancient Greece of the 1960's.

One of the founding partners, Nick, told me that as a boy he used to keep a watch in a Grecian winemaker's vineyard. As he grew older he was given the responsibility for tending a flock of sheep on the hills of Greece. Around the time he became a legal adult, Nick talked to his father about leaving the small town he grew up in, to seek out places and opportunities where he might be able to make a better go of things. His father, while reluctant to see his son depart, understood the calling of the young man, and sent him on his way. Nick sought work aboard a ship, the SS Andreas Panou. The ship ran into technical difficulties in the Greek port of Piraeus, so Nick and his crewmates were sent ashore to get a bite to eat, since the mess hall had no electricity. The foreman wanted the young lads to return before they had been able to get some food and they refused. The foreman and the Captain subsequently discharged Nick and his friend in October 1965.

Nick recalled how he sought and secured passage working aboard another ship. Less than six months later, in March of 1966, while on a transition in Vancouver, Canada; he noticed a newspaper written in Greek. Since he had not read anything in Greek for weeks, he bought the paper where he learned that the SS Andreas Panou had crashed off the coast of Spain.

In the photo at right, from left to right, are Andreas, Nick and Theo of BQE Billiards and Bar in Jackson Heights.

Click here to read the rest of our story about the history and the late night restaurant dining at BQE Blliards and Bar in Jackson Heights.

The Taste of LIC The weather cooled down this week, dropping into the 50’s accompanied by rain. The streets were wet and it was cloudy above as I made my way through the intermittent drizzle down to the East River waterfront to attend the 10th annual Taste of LIC.

As I approached the East River, I could see the grand white tents in the distance, filled with people, light and the distant murmurs of conversations. I had planned to arrive a bit later at the event, after things had calmed down, so the restaurateurs and chefs at the event would have a bit of time to talk.

Inside the tents the mood was pretty buoyant as I found folks drinking and dining buffet-style, sampling the offerings of a mix of about sixty different restaurants, food producers and beverage makers. Conversations were flowing too about the food, the feast and the other fun things to do in the Long Island City neighborhood.

The Chocolate Factory Theatre is the organizer of the Taste of LIC. The theatre was co-founded by Sheila Lewandowski, the Executive Director; and Brian Rogers, the Artistic Director. They showcase the works of up-and-coming writers, producers, directors and actors / actresses as well as the development of in-house works. Click any of the following links to go to that neighborhood in Queens. Links are also located along the left side bar. 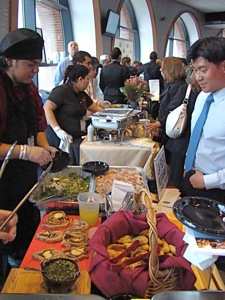 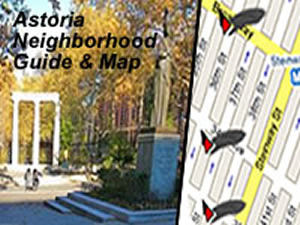 Astoria Maps - Things To Do In Astoria Queens 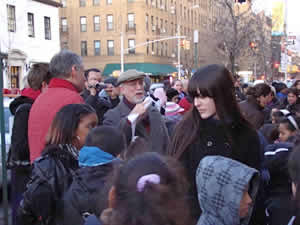 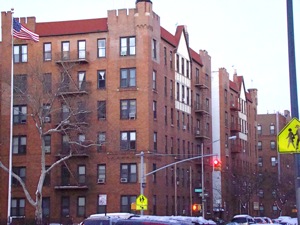