Part Two Of A Continuing Series During Hurricane Irene / August 27, 2011 [7 pm] / Cleveland Ohio / Queens Buzz. We rarely allow our reporters to be put in harm's way. But sometimes reporters attach themselves to a story that they just can't let go. Possibly due to their psychological make up, and sometimes having to do with some dark secret from their past.

And so, reluctantly we put two of our finest, Dorothy Gale and her trusty side kick Toto, onto one of the last planes leaving LaGuardia Airport in Queens around 7 pm Saturday evening. We had to pay for cab fare since the MTA had ceased subway and buss operations at noon.

As fate would have it, their courage turned out to be serendipitous for us and our readers, as Dorothy - from her seat in the airplane - spotted the Queensboro Bridge and an unidentified cyclist tumbling through the skies somewhere above the state of Ohio. Thankfully Toto was with her, as he quickly snapped the photo shown above, before the bridge and unidentified cyclist were lost in the clouds.

Are they never to be seen again? Stay tuned, as we will post another report from Dorothy in Chicago before bedtime Saturday night. They say a picture says a thousand words, and there's no doubt about that when one sees the photo shot by Toto of the Queensboro Bridge and an unidentified cyclist, both of which were swept up and carried west by 74 mph winds of Hurricane Irene.

Our reporter, Dorothy Gale, said that the winds were slowing and that the bridge had begun descending toward earth. Chicago meteriologists began forecasting where the bridge might land. Their preliminary forecast is that it will come back to earth hundreds of miles west of Chicago.

Dorothy said that she and Toto would likely try to get a bit of rest in the windy city before renting a car driving west in pursuit of the bridge. We have just received reports that Dorothy's and Toto's assignment on this story has been further complicated by preliminary reports that a small band of lions and tigers and bears were spotted stopping traffic just west of Chicago. They are believed to be lead by the Scare Crow, considered by some to have one of the most finest criminal minds of the 20th century.

Look for an update on this exclusive Hurricane Irene coverage tomorrow morning.

Lions and Tigers and Bears

Gang West of Chicago Appear to be Do Gooders August 28, 2011 / Chicago Ill / Queens Buzz. Part Four Of A Continuing Series During Hurricane Irene. Reports about a group of lions and tigers and bears stopping traffic west of Chicago are true. The group is lead by the Scare Crow as reported above, but based on Dorothy's and Toto's preliminary report filed early this morning, this is a gang of do-gooders, not criminals.

We understand now that the only thing stopping Dorothy and Toto and their new found friends from retrieving the Queensboro Bridge in time for the Monday morning commute is the notorious Wicked Witch of the West.

And time is running out. Stay tuned for an update at noon Sunday, August 28th for another installment of this exciting exclusive. August 28, 2011 / 12 noon / Kansas / Queens Buzz. Well, as fate would have it, we have some good news and some bad news. The good news is that the Queensboro Bridge has been found, recovered and it's insured, so it's expected to be back online, recovered from mayhem by the Monday morning commute.

The bad news is that Dorothy and Toto have resigned from Queens Buzz reportorial staff. Upon arriving back in Kansas, Dorothy, who'd bought some new shoes in Chicago, told us that she wanted to hang back in her home state to be with her aunt and uncle who had raised her and that she would begin looking for a job out there.

Enjoy what remains of your weekend. We return to our normal reporting duties Monday morning. Ciao. 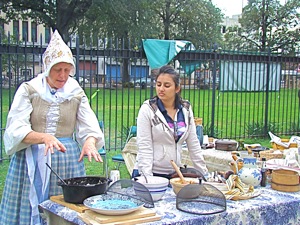