Michael is survived by two children, Michele Kazarian and John Halberian [wife Stephanie]; his sister, Rosemary; five grandchildren including Jackie and Katie Kazarian and Christopher, Meg and Jack Halberian; and neices and nephews.

Services will be held at 2 pm at the Armenian Church of the Holy Martyrs in Bayside. The church is located on the corner of Horace Harding Expressway [LIE] and Oceania Boulevard. Continued / December 27, 2010 / Astoria / Queens Buzz. The first time I met Michael Halberian was last August as he was preparing to sell the Steinway Mansion. At age 82, he was still immensely fond of the home he inhabited, but he had grown weary from looking after the 27 room mansion and the two acres of the surrounding grounds.

It was a humid warm day, but cool inside the mansion as it had high ceilings and many of the doors that opened out onto the grounds had been opened to let through the breezes coming from the nearby waterways. Michael led me into his study which felt like walking through a time warp into a turn-of-the-century English study of a Jules Verne novel. In the study I was surrounded by the latest gadgetry and icons from the 19th century including telescopes, a Revolutionary War cannon, an old chess set, a globe from the one of the large ocean-crossing passenger ships, and floor-to-ceiling bookcases encompassing three of the four walls. What I had expected to be a one hour interview, quickly turned into four. I would have stayed far longer had I not made other commitments, but I came back throughout the fall whenever the opportunity was made available to me. Michael was as interesting a person as the Steinway Mansion is an historic site. The man and his home shared a sort of symbiotic relationship, like the master curator to a very special museum.

Michael had been born in the Steinway Mansion in 1927 and he recalled literally shoveling tons of coal into the large furnace in the basement during the cold long winters [the furnace has since been replaced by something newer]. The fireplaces still work and I witnessed both he and his son putting coal on the fire to generate heat in the large parlor rooms.

Michael married in 1950 and lived with his bride in the mansion until 1958. Their two oldest children were born in the mansion, and the youngest one was born after they had moved into the Garden Bay Manor development in Jackson Heights. Michael was the consummate host. While his father had been a tailor, Michael decided to become a restaurateur. He first tried his hand at his father's business but decided it wasn't quite right for him. During that time he enlisted the services of Peter Vallone Sr. [to secure more time for a move], as Judge Charles Vallone and Jack Halberian [Michael's father] were both avid pinochle players as well as good friends. opened; Michael's father quit the tailoring business to become the morning maitre D. His father relished his new position since, like his son, he was a very sociable man. Jack Halberian, a tailor by trade, is shown in an oil painting in the photo above.

Michael's father died in 1976. Within two years, both Michael and his son John decided to return to the mansion. Michael ran the Knickers restaurant until it was lost in a fire in 1985. Knickers was a popular, casual restaurant; reflecting the style of its owner, which was captured in a newspaper story shown in the photo to your left.

Michael lived in the mansion until his death on December 27, 2010. During his lifetime he was a big collector of books and other items pertaining to New York city history, most of which could be seen dispersed throughout the Steinway Mansion. These artifacts continue to add to the mansion's charm and significance as a cultural and historical site.

Michael could only imagine what sort of tourist traffic [and attendant tourism spending] a museum dedicated to the Steinway legacy could bring to the local economy in Astoria, Queens and New York city. I believe this was the vision of Michael Halberian, which if realized, would make Michael Halberian the Steinway Mansion Museum's first curator and one par excellence. Michael will be dearly missed. We hear that his heirs, as well as many members of the community, hope to make his vision a reality.

The funeral services for Michael Halberian were held on Friday, December 31st in Bayside. Michael's son John is planning to move back into the mansion until it is sold.

Many thanks to Michael's children Michele Kazarian and John Halberian, as well as Michael's sister Rosemary, for providing some of the information contained herein. The rest of the information was obtained directly from Michael Halberian during interviews I had with him since first meeting him last August.

Will The Historic Site In Astoria Be Next? On March 27th there were over 600 items auctioned, where bidding started in the hundreds to thousands of dollars. In addition to the hundred or so buyers who appeared at the auction house, bids were also taken over the internet.

We'll have more on this story later this week. The photo to your right is of the Indian statue that once stood on the grounds of the Steinway Mansion, with the bidders shown through the doors while the auction was in session in March.

$element(adman,groupad,Catgry Realestate)$
Click this link for promotions, discounts and coupons in Astoria and Queens. 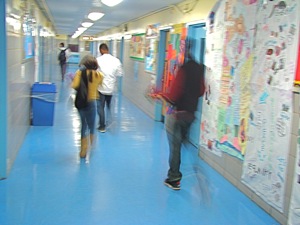 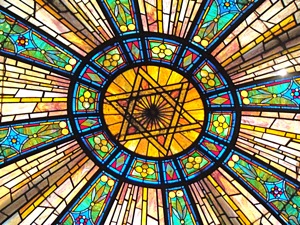 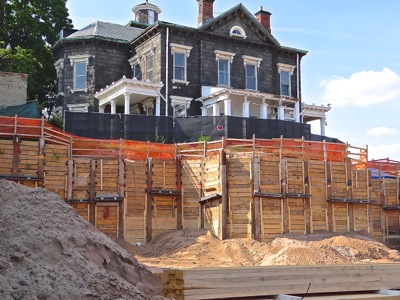 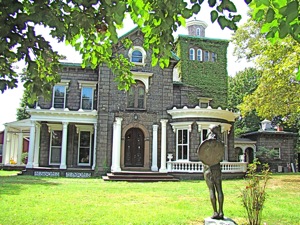