Flushing Meadows Corona Park / Art Museums in Queens / October 19, 2008. On Sunday the Queens Museum Of Art [QMA] opened Erasing Borders 2008. This exhibit features 40 artists from the greater Indian sub continent, including Bangladeshi and Pakistani art. The show included fingernail bas reliefs which are an ancient artistic tradition that has been handed down through the ages. There was a painting that was reminiscent of some of the Indian paintings found in Hindu temples all over India showing sexually explicit interaction between two people. Modern art was also on display, mixed with an Indian sensibility, as well as some vibrant paintings which draw upon the tradition of Indian mosaics.

The photo to your left shows the diverse crowd attracted to the opening last Sunday. We spoke to several of the artists and took numerous photographs which you can read and view in the story below. QMA is just eleven subway stops from Long Island City on the #7 subway and only five stops from the Jackson Heights / Roosevelt / Broadway terminal which connects the E, F, G, V and R trains to the #7 subway line. Scroll to the bottom of this page for a map to the Queens Museum of Art in Flushing Queens NY.

Contemporary Indian Art Of The Diaspora

Flushing Meadows Corona Park / Art Museums in Queens / October 19, 2008. I had the occasion to visit the Queens Museum of Art for its opening reception of an exhibition entitled: Erasing Borders 2008: An Exhibition Of Contemporary Indian Art Of The Diaspora. This exhibit runs through November 19, 2008. The photo to the right shows a portion of the crowd who attended the opening reception for the exhibit, including Executive Directory Tom Finkelpearl standing to the far left in the photo.

This exhibit features the works of 40 artists: all with Indian ancestry. The diaspora refers to the dispersion of Indian people throughout the world, but in this exhibit, it specifically refers to those who’ve settled here in North America. During the reception, I was able to talk to the exhibit curator and hear some of the artists talk about their work. Vijay Kumar is the exhibit curator, so I asked him what the meaning or intent of the exhibit was. He said that any single artist can move into or out of this exhibit without changing its essence – that the exhibit at its essence would remain the same. Indian culture has a mystical / undefined spiritual element to it, and this exhibit held true to that, as I was never able to specifically pin down what the message was. But Vijay did provide me with a few clues.

Perhaps the most significant insight into what the exhibit is about came through a comparison Vijay had made of the India of the past to the America of today. He noted that for many centuries India had long been an open culture that assimilated the ways of its visitors and invaders into its culture. So what we see is in this exhibit is a collage of many different influences on Indian culture through the lens and views of the contemporary artists showcased in the art of ‘Erasing Borders 2008: An Exhibition of Contemporary Indian Art Of The Diaspora’.

Indian Art Of The Diaspora Artist - Queens Museum Of Art I was able to speak one-to-one with Suhas Tavkar. He showed me a couple of paper bas reliefs he’d done with his fingernails. When I first looked at his work, prior to meeting him, I had wondered what his art was about because all I had noticed were white circles on a black background. But if you look closely [see photo to left] you can see his bas relief artwork which is reflective of the art on temples in ancient times. During the Greco Roman period bas reliefs were carved into the stone on the great temples of society, such as the Parthenon in Athens. The Indian paper bas reliefs were a means through which the art was, in a sense, democratized because you didn’t have to own a temple and hire strong stone carvers to create them. This skill was handed down through generations of his family in India and he learned it from his father before migrating to America.

The Queens Museum Of Art - Interactive Another artist talked about the importance of art interacting with the viewer. She had created a crystal ball, which mirrored the gallery full of viewers around it. I found this theme in another work in the exhibit, which caught my attention. This work was full of strings dangling from the ceiling. On the strings, were small circular mirrors as well as a number of family photos of people doing ordinary things. Since the mirrors reflected us in the gallery at that moment, and the photos reflected these family members at a different time, I interpreted this to symbolize that we are all a part of the same family, albeit displaced by time and space. This was a fascinating display of an intriguing concept and another example of the openess of Indian culture.

It’s well known that Indians have some of the most sensual art of any ancient culture. Most cultures somehow twisted the beauty of the human body and sexual acts into something filthy and prohibitive. But this is not the case in Indian culture where their art shows many beautiful scantily clad women enjoying their own and their lover’s sensuality; sometimes in sexually explicit ways. When the English first came to India, they were shocked by such open displays of sexuality. But sensuality lives on in Indian art, even in the Contemporary Art of the Indian Diaspora, which can be seen in this photo of two lovers sharing tongue – albeit from a distance. The influence of Islam is also in evidence in the Contemporary Art of the Indian Diaspora. Between the 6th and 8th centuries AD Islamic civilization [which created the decimal system] dominated the middle east and western Europe. They expanded the Islamic Empire as far west as Spain, and as far east as India and present day Indonesia. The Moslems built large lavish mosques that were decorated with geometric and other shapes, and frequently decorated with brightly painted colors or bright stones. The Taj Mahal is a good example of the Indian adoption of this architecture. Some of the paintings appeared to reflect these Islamic influences, albeit in a contemporary oil painting adaptation. You can see this by viewing the photo to the left.

And lastly, but not least, there is modern art. One of the artistis, Antonio Puri, quotes Kandinsky as saying that, “in modern times, abstract art keeps spirituality alive”. He goes on to state that Kandinsky’s modern art was rooted in Christian spirituality, while Puri’s modern art is rooted in Buddhist spirituality. The difference, he explains, is that Buddhists teach ‘compassionate detachment’, while Christians teach ‘salvation through suffering’. I understand the concept, but I’m not so sure I understood how it is manifested in the art.

Ah, but isn’t that the purpose of art? To expand one’s perspective and spend a little time contemplating another’s point of view? To understand who we are, how we fit in and what it means to be here now. Find out for yourself by visiting ‘Erasing Borders 2008: Exhibition of Contemporary Indian Art Of The Diaspora’. Open until November 19th at QMA.

Contemporary Indian Art Of The Diaspora - Queens Museum Of Art 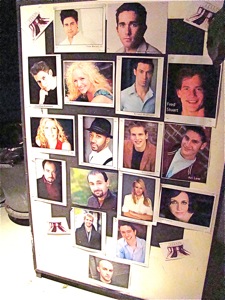 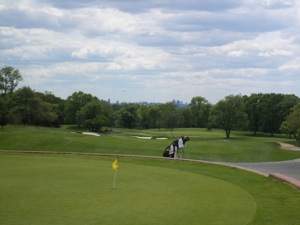