Flushing Meadows Corona Park / January 2009. Shea Stadium is being torn down. In the photo above you can see the stadium as it was at the end of January. Construction crews continued the demolition effort in the bitter cold during the last week of January and the milder weather in the beginning of February.

The deconstruction of the stadium started in January 2009 and was completely torn down [but not removed] by the end of February. Flushing Meadows Corona Park / February 18, 2009. We’ve been tracking the progress of the Shea Stadium demolition effort since mid January of 2009. The crews have been making quick work of it as you will see by the photos included in this article.

The field was built in the early sixties. It opened in the Spring of 1964 for the Mets baseball season and was used in the Fall of 1964 by the New York Jets for the football season [the Jets moved to New Jersey in 1984]. The last game played in the stadium was against the Florida Marlins, which the Mets lost [click here for related Mets / Shea Stadium story]. Perhaps one of the most significant non-athletic events ever staged at the stadium was the Beatles concert held in August of 1965, just a year and a half after the Beatles had played on the Ed Sullivan Show and had begun sweeping the country [click here for related story about the Beatles in New York in 1964 in new indie film Lovely Lily which was produced by a Jackson Heights resident].

We’ve tracked the demolition over the past couple of weeks. The photos in the opening of the story shows the stadium in January when over half had been removed. The new stadium, Citi Field, will be ready for operation in time for the Mets opener which is scheduled for April 3rd against Boston. April 2009. We went to a Taste Of The World at the new Citi Field today. And from atop the new restaurant / lounge area we could see the construction crew cleaning up the remains of Shea, as if it were a routine pavement job in the parking lot on a Spring day.

I suppose we could safely now say that Shea Stadium is officially dead. While the last pieces of the stadium came down on February 18, 2009, it is only now, a full two months later, that the debris has been removed. Shea Stadium was an icon on the Queens scene since 1964 when it first opened as the home field for the New York Mets and the New York Jets. 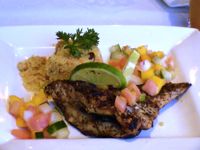