Museum Of The Moving Image Interactive Exhibits – Museum Of The Moving Image In Astoria

Astoria / January 3, 2010. I stopped by the Museum Of The Moving Image this holiday season to get an update of the museum’s current exhibits and find out how the renovations are moving along. Tomoko Kawamoto, the museum’s Public Information Manager, agreed to guide me through the museum with the help of her daughter, who kindly demonstrated how many of the interactive exhibits functioned.

Our first stop was the third floor, which is the floor upon which I had had the least experience. On this floor are many interactive exhibits, which provide children with a fair level of entertainment, while educating them about how animation works, how films are made and how broadcast television works. There are also many museum pieces showing the state of the art equipment in the film and television industries throughout the past century. Philo T. Farnsworth was the inventor of television, making the first verified broadcast in 1927. Philo was a farm boy from Utah whose early explorations attracted him to the issue of how to harness light [photons] and energy [electrons]. Preceding Philo in the creation of moving image equipment was Thomas Edison who created the stock ticker which was the first electronic broadcast system, followed by the patenting of sound recording and replaying equipment, and culminating in the first motion picture capture machine called the kinetograph. This was done in the late 1800's. We collected the information contained in this paragraph prior to visiting the museum. The first exhibit demonstrated to me was the animation exhibit. Here kids can create 100 frames of animation by moving things around on a screen. Once they’ve moved a few things around they can play the animation back. We then moved onto a dubbing booth. A dubbing booth is where the television editors ‘dub’ or place a sound track to go along with the video. An example of this might be music or a voice track that might have been recorded clearly in a studio, instead of during the acting sequence. Another example of this would be in a documentary, where the voice is placed upon a track in sequence with the video. They also had an exhibit where you could watch a video sequence and then insert sound effects to accentuate what was seen on the video. As for instance in slapstick comedy where someone gets hit and they dubbed in a loud noise. Another exhibit showed how the control room operator can switch the video from camera to camera, showing the viewers what’s on camera one instead of camera two … and so forth.

Chroma Key Interactive Exhibit - Things To Do For Kids In Queens And then there’s the famous chroma key, which is used to this day to display weather maps on television. The chroma key uses a blank green or blue screen into which the weather person points, while in reality the weather map is being overlaid into that part of the video from the control room. Generally the weather person is actually watching themselves on TV as they point to the weather systems on the map – as in reality they are just pointing to a blank green / blue screen. This technology is used for all sorts of other applications like inserting cartoon characters, symbols and what not. Props & Make Up At The Museum Of The Moving Image

In the last section of the third floor are a number of interesting exhibits of some of the props used in well known movies such as the little girl in the Exorcist [kind of gruesome] as well as a high rise complex used in another movie like the towering inferno [not sure if this was the movie but you get the idea]. The photo to your left shows them shooting the prop skyscraper, which is on display at the museum and a portion of which is shown in the inset photo. The last section of the third floor held some beautiful ‘museum pieces’ of some of the old televisions found in wealthy homes during television’s infancy. There is also a continuum of classic video cameras showing how the technology evolved and shrank in form factors. Ironically enough, most of the functions of the equipment found in the museum, can now be performed with a video camera and a Mac computer.

Second Floor of The Museum Of The Moving Image We headed down to the second floor. In the entrance way is a gallery of photos of many of the famous Hollywood greats from eras gone by [see photo at top of page]. As we passed through the doorway to our right was the famous Tut Theatre, which as you can see by the photo, the name seems to fit.

The second floor contains a number of costumes, make up and icons of television and film. Some masks date from the early days of the moving image, such as Frankenstein, to more recent times. The museum is currently undergoing renovations. The entrance is a bit obscured and located near the corner of 35th Avenue and 36th Street. The renovations are being done to the back of the museum and encompass a height of all three floors. The back section will be comprised of a large atrium which will essentially encompass three components.

The first component will be a large new theater of 264 seats with a very, very large 50 foot amphitheater screen. This should enhance the thrill of any good movie. The second component will be a new screening room which will seat 71. And the third component will be a combination of increased gallery space in the stairwell leading to the new section, increased classroom space and a garden. All of this is due to be open in late 2010, for which an official date has not been set. Cheers. 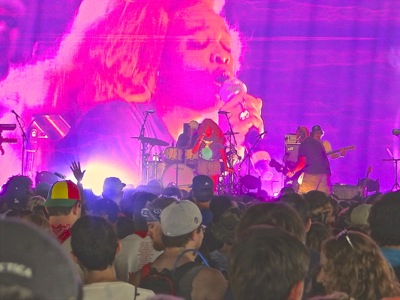 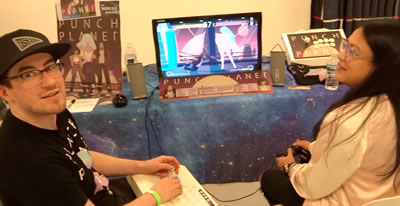 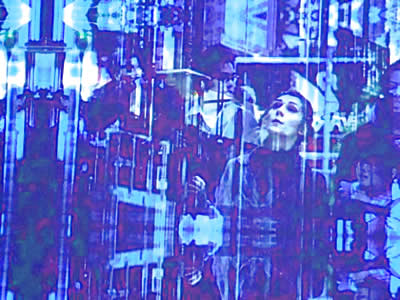 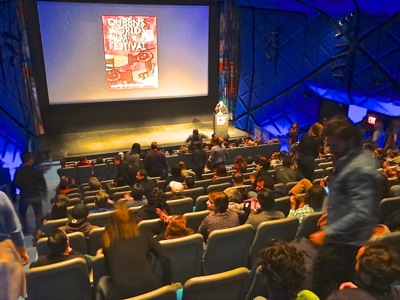