Queens State of the Borough Address

Katz Delivers Her Third State of the Borough Address Last Friday I headed down to Jamaicatown to watch Queens Borough President Melinda Katz deliver her third State of the Borough Address at the Milton G. Bassin Performing Arts Center at York College.

I entered the auditorium shortly after she began her address where she was talking about her role in the good progress that the de Blasio Administration Education Department, headed by Carmen Farina, is having in moving the needle in enhancing both infrastructure and performance in the NYC Public School System.

As an example about of third of the trailers have been removed, with plans for another third to be removed this year. This means kids are back in regular classrooms - after possibly decades long neglect by prior Administrations [need to confirm this statment].

Galante Dismissed by Queens Library Board

Statement Says Dismissal is "for Cause" - but no Specifics Given

No Specific Cause Cited By Government Officials

"This evening, the Board of Trustees heard a report by counsel. Based on that and a prior report by counsel, a decision was made to terminate immediately Mr. Galante's employment. As the Library moves forward, the Board of Trustees will continue working to ensure greater transparency and the proper administration of the Library and its funds in furtherance of its mission. Queens Library will continue to provide outstanding value to the people of Queens."

A subsequent statement issued by the Queens Library said that the Board of Trustees vote was unanimous and that Galante was dismissed "for cause". When we inquired what the cause for dismissal was, they declined to comment further. The question now becomes whether former Queens Library CEO Galante will contest the judgment, because a $2 million severance package is at stake.

"Tom Galante devoted 27 years of his professional career to the Queens Library, the past eleven 11 as its President and Chief Executive Officer. So, of course, Tom is disappointed by the action taken by the newly reconstituted Board of Trustees. He is extremely proud of his service to the Library and his accomplishments for the people of Queens. As Gabriel Taussig, Esq., the current Chairman of the Board of Trustees, and Jacqueline E. Arrington, then Chair of the Administrative Committee, stated back in February, “The Queen’s Library’s record of accomplishment and its tremendous success as a leader in the field and as a critical resource for the people of Queens is largely attributable to Mr. Galante’s leadership.” Indeed, under Tom’s tenure, contributions to the Library increased by millions of dollars, and the Library has been recognized nationally as a role model and innovator, receiving the 2009 Library Journal’s “Library of the Year” Award and the 2014 ALA/Information Today “Library of the Future” Award, to name just two significant achievements under Tom’s leadership. For the past year Tom has been under constant attack in press accounts that have been based on inappropriate comments about and leaks of Library information. Because of his integrity and respect for the Library as an institution, Tom has chosen not to respond in the press. When he does speak publicly, it will be in a forum that values the truth and not the half-truths and distortions that so far have monopolized the press accounts."

Click here to view our reporting on the Queens Library crisis this year. We've covered a number of events sponsored by or in which Leroy Comrie participated and found him to be well versed in borough issues, hard working and a soft spoken government official who works behind-the-scenes. City Councilman Comrie served two terms in the NYC Council serving the Jamaica and surrounding neighborhoods of St Albans, Rosedale, Cambria Heights and Hollis. During his tenure in office Comrie served as the Democratic Majority Whip, and for a period was head of the Queens delegation.

Shortly after Comrie took office in 2002 [succeeding former City Councilman Archie Spigner] the JFK Airtrain began operations between JFK Airport and the Jamaica railroad and subway station [December 2003]. Comrie was also City Councilmember during the transformation / renovation of the First Dutch Reformed Church into Jamaica Performing Arts Center - which was completed in 2009. During Comrie's tenure as City Councilmember, the Jamaica area was re-zoned [along with the rest of Queens] to accommodate building and growth.

We'll post more about these evolving events at a later date. Click any of these links to scroll down to view the Jamaica News briefs from prior years. December 2013 / Jamaica News / Queens Buzz. King Manor Museum hosted some old fashioned holiday festivities just before the Christmas holiday. They set up a workshop in the back room where families and kids could come to create tree decorations out of the materials used back in the days of Rufus King.

We participated in the workshop, making stringers out of popcorn, cranberries and the like. The market also accepts food stamps, so you can cash your food stamps using your EBT card to get tokens you may use to purchase items sold at the farmers market. The market is open every Friday and Saturday from 8.30 am to 4 pm. The market will be open through mid November [11/16 & 11/17 is the last weekend]. Click here to view a complete report on farmers markets in Jamaica & Queens. July 2010 / Jamaica / Queens Buzz. Queens most popular annual reggae festival has been cancelled this year. The seventh annual Irie Jamboree will NOT occur in Roy Wilkins Park on Labor Day Weekend 2010. Event organizers cited several reasons, but it appears the most significant was economic / sponsorship funding. Event organizers exhausted potential options, before reaching the decision to cancel the event this year. They also asked us to communicate thanks to all of those who worked on, and / or supported the reggae festival, which they intend to revive Labor Day Weekend of 2011. The photo shown is of a performance given at the Irie Jamboree in 2009 and contains a link to our coverage of the Irie Jamboree. August 8, 2010 / Jamaica / Queens Buzz. The JAMS Street Festival covers over 15 blocks and is one of the largest street fairs in Queens. We counted three stages upon which numerous live bands played a wide range of music including the Motown sound, Reggae, Afro-Caribbean, jazz and rock.

Meanwhile the crowd consisted of a spicy mix of Caribbean, Afro-American, Indian and Middle Easterners. There were a number of street shoppers / browsers of European descent too. It has been estimated that over 10,000 people visit this street fair.

And there's some spicy food that reflects some of the varied tastes of the ethnically mixed audience. May 2, 2010 / Jamaica / Queens Buzz. The International Reggae & World Music Awards [IRAWMA] were held last night at York College in Jamaica. Many of the world's most renowned reggae musicians attended the event lingering along the red carpet where reporters had the opportunity to mix with them in conversational interviews.

This was my third venture into the reggae world and with each foray I become a little better versed in the music and the movement which aspires to inspire others to strive to reach their full potential. We will post a more complete report at a later date including photos of the event. This report was filed the day of Barack Obama's Inauguration as the first African American president of the United States of America. I went down to Jamaica, which is an African American and Caribbean American section of Queens, to witness the enthusiasm and joy of having finally achieved an important benchmark of equality in a nation into which most African Americans came not as a free people, but as slaves.

It was an achievement that all citizens of the nation could take pride in, having put some of the legacy of the nation's immoral treatment of other human beings, behind us. Jamaica Queens / January 20, 2009. Today was an historic day with the first African American president being sworn in as the 44th president of the United States Of America. Barack Hussein Obama took the oath in front of a record crowd in attendance, estimated to number between one and two million. Worldwide television and web coverage also translated into hundreds of millions of people from around the planet witnessing this event.

I went down to the Jamaica section of Queens to witness the interest, pride and charm of our fellow African Americans in the community. My first stop was the Queens Central Library, which had made a public invitation to all to come watch the inauguration in its screening room in the library basement. The room seats about 300 – 500 and I would guesstimate that it was half to two thirds full. I was not allowed to take photos except from the back of the room, so after taking a couple of photos I soon departed. Click this link for Obama Inauguration In The Jamaica Section Of Queens NY including more photos.

Church Of The Redeemer - Astoria 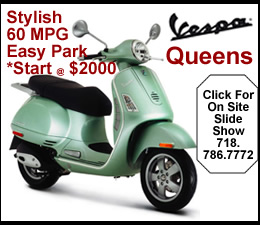 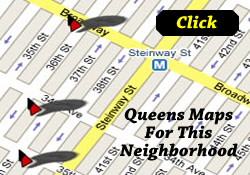 Kicking Back In Forest Hills