July 24, 2010 / Astoria / Queens Buzz. Dire predictions of hot & humid were about the only ones who didn't show on Saturday at the Astoria Music Now rock festival in Astoria Park. A cool dry breeze wafted in off the river making it feel more like the low 80's and dry. You can see this for yourself in the photos we took that show few people, if anyone, actually sweating it out.

Twenty-nine bands, mostly local, came out to play and thousands came out to watch and listen. Click here to view a slide show and report with photos of Astoria Music Now 2010. July 24, 2010 / Astoria / Queens Buzz. Continued. Given the warm weather predictions for Saturday I decided to go to the Astoria Music Now [AMN] rock concert in the late afternoon. I entered the park along the southern end of it, coming in along the East River.

Astoria Music Now had set up three stages along the waterfront, connected by a walking corridor. They are shown on the poster to your right, to which we added numbers in white to make it easier for you to see the location of each stage [the poster legend in our photo is too small to read]. The stages were as follows: 1) a stage under the Triboro [RFK] Bridge, 2) the Memorial stage alongside the Astoria Park swimming pool, and 3) the Hellgate stage just south of the [Amtrak] train trestle. A cool breeze came in off the East River as I made my way up along it. There was ample shade given by the trees along the Shore Blvd walkway which connected the three stages. After surveying the landscape I started at the Hellsgate Stage. It was after 4 pm and Bliminal had just finished performing.

Illuminanjaro was on stage setting up for their gig. The crowd had completely taken up all of the shady areas of the lawn, and a number of people sat in the warm sun catching some rays under the hot sun. As the music began a few of the audience danced, one whom had brought her hula hoop [see photo]. Illuminanjaro has a high energy sound with rap-like lyrics that sometimes resembling Eminem, and at other times sounding more like Led Zepplin.

I headed on down toward the Memorial and Triboro Stages, passing a DJ booth along the way. The Memorial Stage was in transition, so I continued south to the Triboro stage, but stopped along the way to watch the 5 Pointz artists spray painting graffiti art on large canvases. They had an audience, including one woman photographing them plying their craft, with all the intensity of a performance artist [most of this is in the slide show].

On the Triboro Stage Schaffer The Dark Lord had just started. They have a funky syncopated beat that's easy to move to, set with rapper rhythms, and a mix of trash talkin' tough tones. The lead vocal had some good theatrics, which were fun to watch, while listening [see Schaffer & one of the dark lords in photo to left].

Schaffer was followed by Thunderbang. Thunderbang began playing a collection of classic rock songs. A couple of female dancers gently rocked to the music on stage. Meanwhile behind them, back in the distance, the 5 Pointz artists continued spray painting their works, while further up along the river, another gig was about to start at Memorial stage.

Blue Dog had settled into the shady earthen [Memorial] stage alongside the pool. They're a band with three electric guitars and a drummer. One of the pieces they played included a long stretch of classical electric guitar enveloped in a easy going Jimmy Buffet style piece. Another included a nice mix of drums and guitar.

The walk along the East River was scenic, the sun shimmering along the water, boats moving to and fro, and a cool breeze wafting through the trees. Meanwhile back at Hellgate Stage Mainline Gypsy was about to begin. Mainline Gypsy has a quintessential full blues beat. The lead vocalist is one of the few who can hit soulful notes that resonate through the air, capable of shaking your whole being. Along the perimeter of the lawn there were tables where local artists / musicians / designers were selling jewelry, gifts and music.

I bumped into Justin Finley, the event organizer, and we headed down to Memorial Stage conversing along the way. Justin is an Astoria native and current resident. He and two friends, Lizabeth Nieves and Jamie Stellini, were the main catalysts for the event this year, but he was quick to add that many others had also helped. In the event program he'd singled out nearly 20 other contributors. He talked passionately about the event, visioning its future and its potential impact on the community. While AMN is in its third year, the crowds only number in the low single digit thousands. He envisions a day when the numbers will double or triple, adding dollars into the local economy, while publicizing local musicians and talent. We stopped at Memorial Stage where Matt Snow And The Way It Was had begun. Matt was playing a piece with a rock and blues beat. Matt's deep vocals were complemented by two electric guitars, the drums and cymbals and a soundboard. Justin worked his way through the crowd, exchanging greetings along the way. He sat to enjoy the music and to chat with friends which we captured in the photo to your left.

We made our way to the Triboro Stage. At the Triboro Stage, Consider The Source was about to start, so I found a spot on the lawn to watch and listen. The Source played music with an Indian or Middle Eastern influence. One of the musicians seemed to enter into an uninhibited trance while playing his guitar. You can see some of it at the end of the slide show below.

The Music Scene In Queens While sitting on the lawn, enjoying the cool breeze and music, I thought about what I'd just seen and heard, pondering what this event would look like in the future. The rock concert had attracted a large relaxed crowd, enjoying music by some of the best bands in Queens, on a beautiful day in one of the finest city parks in the world ... all only a short walk, bike, subway or car ride away from 2.2 million Queens residents.

I think Justin Finley, just might be onto something.

Click this link to go to the Astoria Shopping Center & Map which contains links to independent stores run by local merchants.

Click here to go directly into the photo album to view photos of the Astoria Music Now rock concert of 2010. 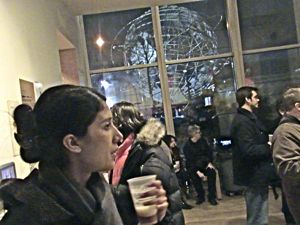 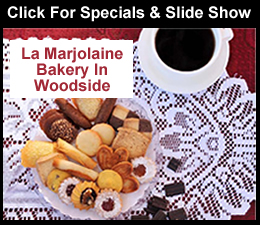