Dining At The Waters Edge

This restaurant closed in October of 2015.

So if you’re considering whether to go to Waters Edge Restaurant let me give it to you in a nutshell. The food was nearly perfect, the setting has a view that’s nearly beyond compare, and the service hit that mark rarely seen – politely being there with information about the food or the menu, or the plate or beverage precisely when you wished it, while floating in the background the rest of the time. The prices were a good value even by the competitive Queens standards. The Waters Edge provides world class food, service and ambiance at reasonable prices and is a steal when compared to its neighbors across the river. Appetizers range from $12 to $21 and entrees range from $28 to $39. The Waters Edge Restaurant is located at the East River on 44th Drive.

So you can skip the rest of this review if you wish, but we have a lot from our experience to impart to the interested reader and some photos to match. Let’s start with the ambiance. Click here to read our report and view photos of the Waters Edge Restaurant in LIC.

Dining At The Waters Edge In Long Island City

Long Island City Neighborhood / LIC Restaurants / Restaurants In Queens / Queens Buzz. LIC / Long Island City. After a long hard day at work, the Water’s Edge would be a good place to treat yourself. As you walk down the street to its waterfront location, you begin to let the environs into your being and the thoughts and tensions of the day begin to retreat. I walked around the back entrance, where there’s a side balcony overlooking the water. It was nearly sunset so I had a nice view of the Manhattan skyline, a good look at the bridge and the moving water and occasional boat made me feel as if I were on vacation.

I turned back around and entered in the front doorway. There’s a nice black marble floor that tells your feet they are somewhere nice. I was greeted by the restaurant's head hostess, Helen who invited me to take a seat at the bar while she tended to other customers. There’s a Sushi Chef, James, at the bar and a view out the windows onto the East River.

I had some flatbread and a creamy dip along with a few sips of a 2005 Argentinian Malbec. The Malbec, Don Niancor, had a fresh bouquet, a heavier syrupy flavor, rich with grape and plum flavors. The dip was a cream mixed with rosemary, fennel and paprika.

At the bar I met Marika, the restaurant’s former owner who now plays a role in helping manage the restaurant. It just changed hands a couple of months ago. Based on our experience, the restaurant seems to have landed in capable hands with its new owner, the Singh Hospitality Group, which has been in business since 1990 and current owns six other restaurants on Long Island, some of which are also at the higher end of the scale. Savash, the restaurant manager seated me along the windows overlooking the East River. The restaurant seats 120 people in its main dining area. There’s additional room on the balcony described earlier and a large private party room upstairs which is rented out for special occasions. The main dining area is broken up by what appear to be colonnades which are of dark wood and contain embedded mirrors. The ceiling contains embedded lighting, which is augmented by candle light and soft wall lights. Art Deco is the prevalent style.

I started with a few appetizers which were prepared by Michael Gadaleta, the new Executive Chef of the restaurant. He used to preside over the food at the Delano Mansion which is the located on the golf course of the town of Oyster Bay on Long Island. Oyster Bay is widely known as one of the ‘Old Money’ areas on the island.

Mohammed was my waiter for the evening. He is a very pleasant man who reminded me of the fabulous service I received at a meal I had had long ago on the Bosporous Straits in Turkey in a very old world restaurant. So the appetizers were a fig with proscuitto served with a passion fruit sauce, oyster tempura and spicy tuna tartare with radish. The fig was sweetened lightly with a port syrup and had the texture of a creamy chocolate that slowly evaporates in your mouth. The oyster batter blended seamlessly in with the oyster itself, so that you tasted hints of the oyster, but could never really sense where the oyster began and the batter ended. And the tuna has a nice spicy zing to wake the taste buds from their lullabye. The restaurant seemed to reflect Marika’s decorating style and desire to provide a getaway restaurant for visiting yachters and Manhattanites, as well as us Queensians. The chairs are well padded and comfortable. This is one of many advantages Queens has, say vis a vis a Manhattan restaurants. In Manhattan the seating is frequently tight and uncomfortable. At the Waters Edge, it seems one could get almost too comfortable what with the fine service, the good food, the breath taking view. Nightfall set in and the Manhattan skyline started glowing like the stars. A yachtsman had docked just after I had been seated. He arrived on a large private ship. It seems the restaurant still attracts boaters looking for a respite along the East River. In the background on the restaurant’s sound system I could hear a jazzy horn and bass working gently together. The restaurant has a piano and on some nights has a live piano player. You’ll have to call ahead to get confirmation of days and times.

The main entrees I had were twofold. I had a soft shell crab tempura in a tropical jalapeno fruit sauce with beurre blanc, and a filet mignon with shitake mushrooms in an aged balsamic reduction sauce, accompanied by roasted fingerling potatoes and green haricot beans. I’m going to tell you about the filet mignon first, as it was one of the finest tasting filet mignons I have ever had. It was braised on the outside and had a soft flavor reminiscent of kobe. The balsamic reduction had a light sweet and salty flavor, which nicely complimented the juicy tender taste of the meat. On the inside it was moist and came apart ever so easily, before sliding down to its destination. The fingerling potatoes had the consistency and taste of a tightly made bread, while the haricot beans were served al dente and had a light fennel flavoring to them.

The soft shell crab was light and flaky, but also juicy. This pleasant contradiction caught me by surprise. The crab had a light sweet buttery taste to it. In some of the tastes of it, the soft shell added a nice texture which I chewed on after most of the crab had left my mouth. Diced fruit added to the light sweet flavoring. You say you’re full? No, no, no. Let’s not stop now.

I finished with a miso glazed halibut with jasmine fried rice. The fish was topped with daikon which you can see in the photo, and flavored with a light miso sauce. The halibut was moist toward the dry side and the flavors complemented the texture. The rice was flavored with a light garlic and mache. About a fifth of the rice included vegetables, including an al dente squash if there is such a thing, which again hit the top of my personal charts for this sort of side dish.

Conversations around me seemed to be market driven, as Wall Street had had one of its worst days in years. The name of Lehman Brothers came up several times, including by the yachtsman who had docked just after I had been seated. I liked his response to the crisis. Go to a great restaurant with a wonderful view away from the conversations in Manhattan which likely would have been all about Lehman, while here there was just a bit of it. And he said, “We’ll just have to wait to see how the market reacts tomorrow.” The Captain of the waiting crew, Robert, came to announce that the cheesecake finale was ready. It had a light lemon flavor and parts of its exterior had a crisp sweet glaze to them. The texture inside was of a light airy quality and it was served with blueberries and a sweet sauce. It was accompanied by a cappuccino which was made perfectly. The perfect end to a perfect dinner. Appetizers run from the low to high teens and main entrees run from the low twenties to the mid thirties. Hey Manhattanites, can you believe it?

This feast is well worth the money and the trip. There’s also valet parking at the entrance, but be advised that the restaurant requires proper shoes and slacks and a collared shirt for men and comparable attire for women. As I left the restaurant I started planning my return visit. 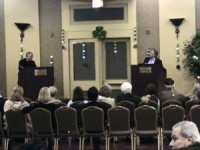 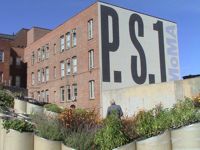 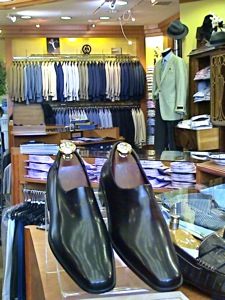