Memorializing A Century Of Neighborhood Service To The Nation May 28, 2012 / Woodside / Ethnic & Religious Culture in Queens / Queens Buzz.  On Monday I attended the 64th annual Memorial Day Parade in Woodside.  The parade, which dates back to 1948, is sponsored by St. Sebastian’s Catholic War Veterans Post 870.

The Woodside Memorial Day Parade turned out to be a journey back through the last century of wars, in which many of the enlisted men of Woodside played heroic roles.  I found the event was really more than a parade.  It’s a blend of religion, culture and patriotism all rolled up into an historic journey to four Woodside memorial sites, that are dedicated to those who died fighting for the country.

Click here to read the rest of our report and view a slide show of the Memorial Day Parade in Woodside 2012.

Memorializing A Century Of Neighborhood Service To The Nation

Continued. May 28, 2012 / Woodside / Ethnic & Religious Culture in Queens / Queens Buzz. The parade starts with a mass at St. Sebastion’s church in Woodside that begins at 10 am.  Following the mass, around 11 am, a group had congregated in front of a recently dedicated Catholic War Veterans Memorial dedicated to Viet War Vets at the corner of Woodside and 57th Street on the St. Sebastian school campus. The ceremony began with a short speech by Monsignor Michael Hardiman of St. Sebastian’s Church.  This was followed by the placing of flower wreaths in front of the memorial by a number of local groups.  The Viet War Memorial has 28 names on it of Woodside vets. I was told that the Woodside zip code had suffered more casualties during the Vietnam War than any other zip code in the nation.  After the wreaths had been laid there was the playing of taps and then three rounds of a three gun salute were fired in honor of the fallen servicemen.  The ceremony ended after the bagpipers played Amazing Grace … and then the parade began. The parade included flag bearers, bagpipers, veterans and any of the audience that wanted to walk in it.  So all of the people attending the event joined in the parade as it headed down 57th Street to 39th Avenue.  It headed east along 39th Avenue and then south along 61st Street before stopping in front of the second site, the St Sebastian’s Post 870 Catholic War Veterans clubhouse. The rest of the route included continuing along 61st Street and turning west along Woodside Avenue, and then left up Roosevelt Avenue before turning north at 56th Street, ending in Doughboy Park.

Click here for a map of St. Sebastian's and the Woodside neighborhood. The Catholic War Veterans Post 870 opened in 1948. Today it has a membership of about 150 of which about half of the members are active. I received permission to shoot a couple of photos while touring the clubhouse.

Inside the clubhouse are a number of plaques honoring veterans of the post.  One of them is dedicated to three members of post 870 who received the Congressional Medal of Honor:  John J. McCarthy in WWII, George H. O’Brien in Korea and Robert E. O’Mally in Vietnam. Another plaque contains all of the medals honoring the brave deeds of the nation’s servicemen [see photo to left]. And photos of some of the members were hung high on a back and side wall [see slide show].

The clubhouse has an upstairs open air patio with rooftop cover, so that the Catholic War Vets can enjoy an open air meal together during the nice weather. The clubhouse also has a kitchen and a bar.   The photo below shows a group of the some of the vets / volunteers who were doing the prep work for the post parade barbeque, while the parade was still in process. Outside the clubhouse several dedications were made and three rounds were again fired before the parade continued on its journey to Woodside Memorial Park, at Woodside and Roosevelt Avenues.  A number of wreaths were placed in front of the memorial in the park and three rounds of a three-gun salute were fired.

On the last leg of the parade we journeyed westward, up Roosevelt Avenue, and then took a right heading north on 56th Street to Doughboy Park.  There’s a memorial in Doughboy Park commemorating the WWI dead of Woodside.  The parade route was shortened a couple of years ago, when the Mayor shortened the length of most parades in the city. I spoke to a number of members of the St. Sebastian’s Catholic War Veterans Post 870 along the trip.  I was informed that there aren’t any WWI vets still alive in the nation, and dwindling number of WWII vets.  Many of the member Catholic War Vets fought in the Vietnam War, and there are still a few who fought in the Korean conflict – but not many.

A number of the vet members have left the neighborhood for distant states, like Tennessee or the Carolinas, but they still return to Woodside on Memorial Day for this parade.  I was told that the new vets - those returning from the Afghanistan and Iraqi Wars - come back without limbs, having lost arms or legs while engaged in overseas duty. Post 870 Commander Jerry Olt is shown front left in the photo above.

Doughboy Park In Woodside On Memorial Day 2012 In Queens At Doughboy Park a few short speeches were given by State Assemblywoman Marge Markey, Assemblyman Michael Den Dekker and City Councilmember James Van Bramer.  These speeches were followed by the laying of wreaths and three rounds of a three gun salute.  After the event many of the members planned to return to the clubhouse for an outdoor barbeque.

Special thanks to Helen and Jerry Olt [Commander of Post 870], Walter Bishop a member of Post 870, and Gail and Bernard McNellis, who are also active members in the Catholic War Veterans Post 870. St Sebastian’s Catholic War Veterans Post 870 was founded in 1946. Monsignor Hardiman of St. Sebastian's church in Woodside is shown right in the photo above.

Photos of the Memorial Day Parade in Woodside Queens 2012 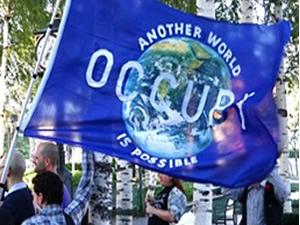 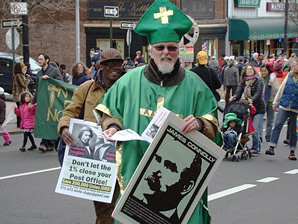